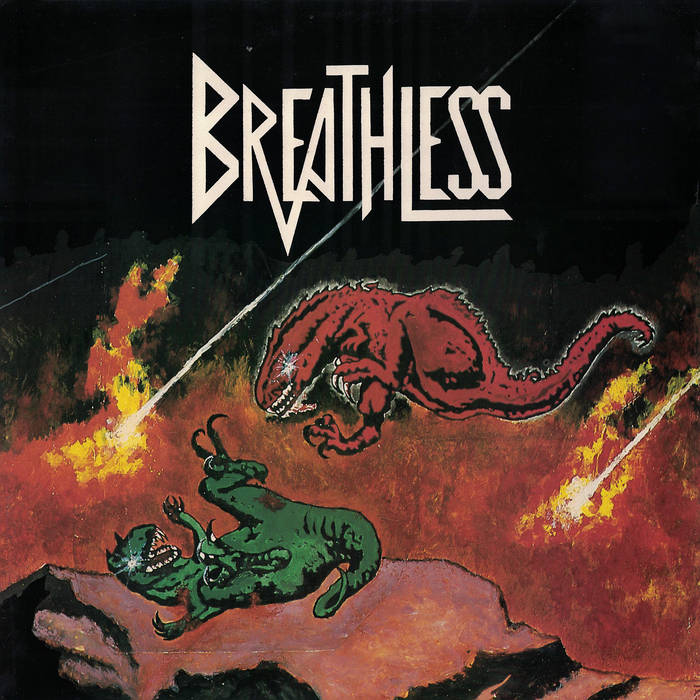 Lute FP This slays. Their bio is vague as to when this was recorded, but I’m going to guess somewhere around 1987.

Mercyful Fate/KD and Judas Priest/Halford had been around long enough to know this band was heavily influenced by them, but vocalist Pascal Remans has a gift that transcends hero worship.

The music leans towards early speed metal, but isn’t stuck there. The production is killer, avoiding that odd tinny sound that so many bands suffered in the mid to late 80s.

Henrik Thøgersen A rare metal relic resurrected from the tomb of obscurity, the self titled album from Breathless delivers an onslaught of electrifying vocals, razor blade riffs, grooving rhythms, and accomplished arrangements forming a tornado of pure heavy metal awesomeness that is sure to leave you, well, breathless! Favorite track: Hell's Fever.

RELICS FROM THE CRYPT, the newly founded sub-label of DYING VICTIMS PRODUCTIONS, is proud to present a reissue of the killer self-titled debut album from Belgium’s BREATHLESS on CD and vinyl LP formats.

Hailing from Genk, Belgium’s BREATHLESS was founded in 1983 by Antonio and Dirk. Antonio already had experience as a drummer in the punk rock bands The Visions and Transylvania, and Dirk had previously played in Hammerhead. Antonio knew Stanis, brother of the guitarist and singer of The Visions, and asked him to join the band as bass player. Because many metal bands had two guitar players at the time, it was decided to look for an additional guitarist. Dirk was friends with Laky, but Laky had never held a guitar before... Friendship being one of the key values of the band, Dirk suggested to teach Laky how to play the guitar, and so he joined the band. Finally, Pascal (who was only 14 years old at that time) was brought in as singer.

The driving force of BREATHELESS was to impress, push the boundaries, deliver high-level tempo changes, and dark and angry vocals - both high and low, which was quite remarkable in the Belgian metal scene of that time. Supporting gigs of international acts followed: BREATHLESS joined Warlock, Helloween, Tyson Dog, and Axe Victims onstage.
BREATHLESS’ debut album was recorded in 10 days. Local record store Gigaswing wanted to release the album, and so the long-player Breathless was born. The LP was well received everywhere, good reviews appeared in the metal magazines, gigs followed, the fanbase expanded…and then came the decline, when the lineup quickly crumbled away…

However, what was captured on BREATHLESS’ sadly only album was pure metal magic: unhinged, unselfconscious, and unlike most of their Belgian contemporaries. Neither strictly traditional metal nor speed metal nor hard rock nor latent NWOBHM, Breathless was a blender of all the tastes of the time, and its indeed-breathless rush was sublime in its sheer energy and electricity. Take the needle of your turntable and drop it anywhere across the album and you’ll be met with raw finesse and total abandon and even exceptionally placed moments of epic quietude – simply, all-out freedom in the spirit of the mid ‘80s before metallic boundaries were firmly drawn out and laid down. Put another way, one look at the cover of Breathless and BREATHLESS’ attendant logo and you just KNOW what you’re in for!