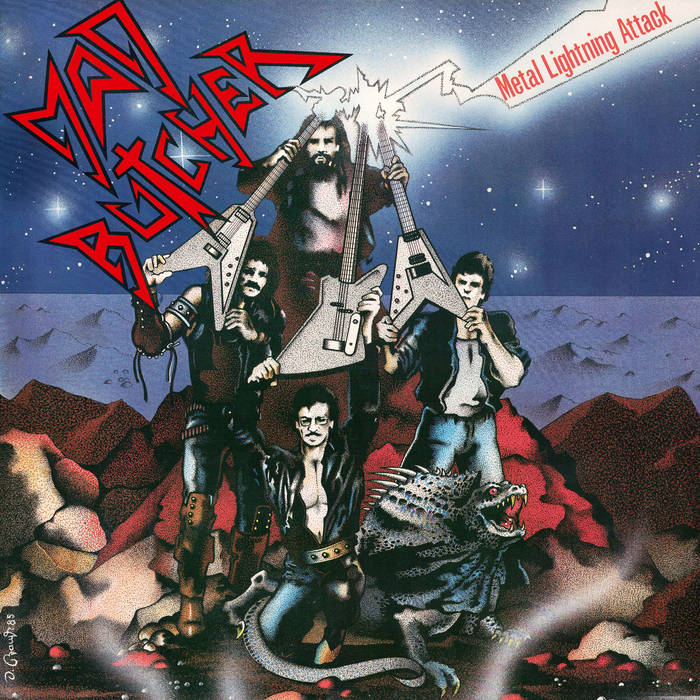 While it would seem that MAD BUTCHER were inspired by Germany’s legendary Destruction, the truth is rather the other way around: MAD BUTCHER predated Destruction by a number of years, and began even earlier than Teutonic metal mainstays Accept, Steeler, Grave Digger, and Living Death. As such, they were one of the first real metal bands in Germany to pick up sonic influence from the burgeoning NWOBHM movement and the early US metal scene. And what they delivered with their ragged ‘n’ righteous debut album, 1985’s Lightning Metal Attack, stands immortal to this day even though it’s largely remained a cult curio among diehard metal collectors.

Begun in name in 1980, by band accounts, MAD BUTCHER arrived at their unforgettable moniker from a trip vocalist/bassist Harry Elbracht took to New York City and seeing a butcher’s shop sign lit up in big neon. Hailing from Essen, in the working-class Ruhr area, MAD BUTCHER were relentless scene members, travelling to all heavy metal festivals and shows across Europe and England. Curiously, they forewent doing a demo and subsequently became prolific on the live front, playing across Germany with the likes of Warlock, Sodom, Helloween, Sinner, Living Death, and the aforementioned Grave Digger and Steeler; in the United States, they played with Slayer, Exodus, Brocas Helm, and Lääz Rockit. Slayer even wanted MAD BUTCHER to open for them on their European Hell Awaits tour, but the band’s management refused it, thus nixing the band’s big break.

Nevertheless, MAD BUTCHER were well-rehearsed after all that live activity and were always prepared to go into the recording studio, but time and means always became an issue. When they were finally ready to go into the studio, in 1984, they lost their vocalist and Harry had to take the mic reins; they also had to write eight new songs, in a chaotic rush, to complete a full-length album. Exacerbating this stream of bad luck, “the technical side of the recording became a disaster,” says Harry, and the record-pressing plant damaged the master tapes to Lightning Metal Attack, resulting in a subpar sound. Still, there’s no discounting the raw energy and excitement across the record, which DYING VICTIMS PRODUCTIONS is honored to unleash in its ultimate edition.

Originally released in 1985 by the short-lived Earthshaker Records who also released Living Death’s first two albums – MAD BUTCHER’s Lightning Metal Attack is a crystallized snapshot of the times. In one sense, you could say the album was “behind the times” given that the band’s subgenre-defiant sound spanned ALL heavy metal of the day – from the aforementioned NWOBHM and early ‘80s US sound, before speed metal and then thrash splintered forth from that wider stylistic pool – but in another, more accurate sense, MAD BUTCHER here kicked out a largely speed metal-oriented sound that thankfully retained the most important aspect, the METAL, and thus retained a more timeless aspect. Guitars are never overdriven, just existing within that sweet netherworld between class and crunch, between rock ‘n’ roll and a harder place; drums bang along steadily whether the tempo’s fast (often) or slower, less often but deliciously hot-rockin’ when they do; and what Harry may’ve lacked in conventional technical prowess, his vocals more than make up for it in sheer attitude and aplomb. So, across the album’s 10 songs in 38 minutes, MAD BUTCHER indeed offer up a “lightning metal attack” that brings it from all corners, from speedy surge to down-tempo strut, and always keeping it wild ‘n’ loose whatever attack they chose. That balance, unselfconscious as it is – between the old tradition and the new traditions then being formed, of just being HEAVY METAL above all – has endeared Lightning Metal Attack to successive generations to this day, and the record remains an ever-relevant relic of times past and times yet to be forged.

And while MAD BUTCHER would disband in 1990, after two officially released albums and a third posthumously released in 2020, their legendry among the true-metal faithful was forever etched with Lightning Metal Attack. Now, for posterity, DYING VICTIMS will bring this lightning to the nations once again, using a powerful remaster by Patrick Engel at Temple of Disharmony, on the format it so deserves: vinyl!