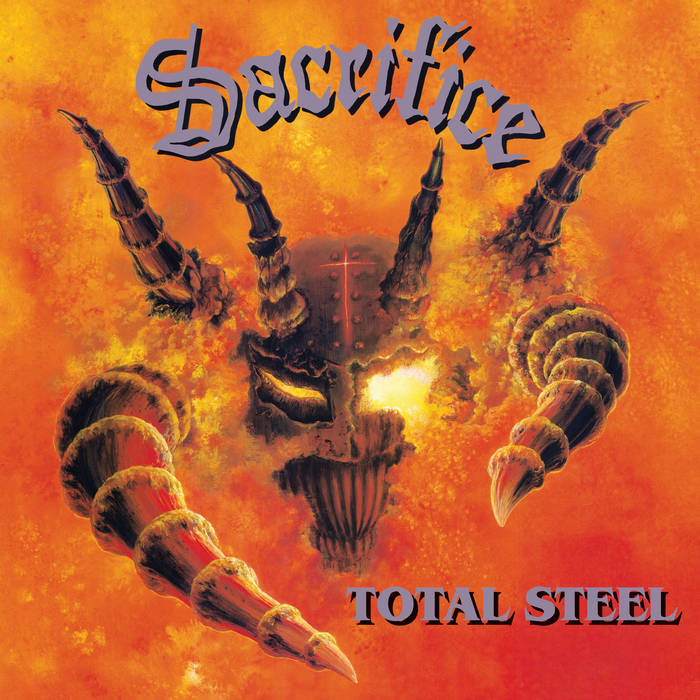 RELICS FROM THE CRYPT, the sub-label of DYING VICTIMS PRODUCTIONS dedicated to keeping the past alive, is proud to present a vinyl LP reissue of the cult second album of Japan’s SACRIFICE, Total Steel. Licensed from Carnal Beast.

From their humble beginnings in 1985 on to their super-cult debut album, 1987’s Crest of Black, Japan’s SACRIFICE have stood for uncompromising, world-eating, thrashy METAL. Let’s reiterate: thrashy heavy metal rather than pure thrash metal. Thick and viscous is their thrust, with straightforward songwriting and exceptionally mean delivery. However, it was with 1990’s Total Steel where they’d perfect that signature style.

Much like Japanese punk takes bog-standard tropes and upends them in unique ways, so, too, did SACRIFICE do such with crossover on Total Steel. Aptly titled in its dedication to rivetheaded ignorance-is-bliss, Total Steel is a nine-song/46-monster which mainlines then-contemporaneous Cro-Mags, Venom, Razor, Carnivore, the UK’s Sacrilege, Nasty Savage, The Exploited, and even early Celtic Frost into something that sounds like all those simultaneously and nothing like ‘em at all. Credit is due to the band’s bullheaded approach to riffing: hammer/hammer/hammer, hypnotically so, stripping everything down to its barbaric basics and then build ‘em up to towering heights. Literally, you DROWN in their crush here, as nearly every vocal-led track tops five minutes, allowing for maximal immersion. Likewise, SACRIFICE’s execution is creepy and sleazy in equal measure, spitting forth attitude even when the linguistic translations go astray. But, the closing couplet of “Don’t Wanna Be Back in Black Days” and “Cold Storm” perhaps perfectly underline their particular headspace.

Amazingly, Total Steel sounds as refreshing today as time-locked as it sounded in 1990. Fans of Power Trip and Iron Age on to maniacs for metalpunk and those who hunt for Combat Core, bow before SACRIFICE!