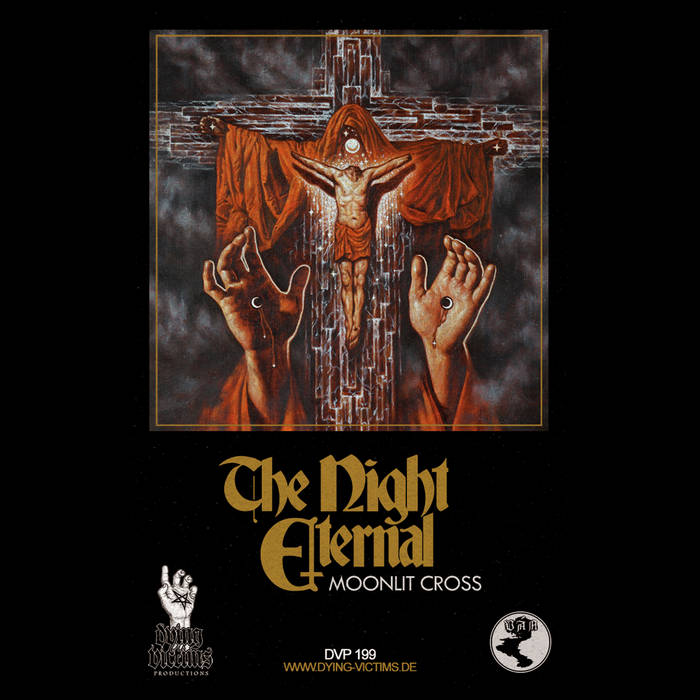 It was but 2019 when THE NIGHT ETERNAL released their bolt-from-the-blue self-titled EP. For a first public recording, The Night Eternal was nothing short of masterful, revealing a depth and wisdom far beyond the band’s meager years. Across its three primary tracks and poignant cover of Judas Priest's "(Take These) Chains" did the German quintet concoct a supremely powerful and stirringly moody sort of heavy metal, both traditionally pure-steel in their dynamics yet also brimming with epicness and a sort of forlorn heroism. Not for nothing did it garner THE NIGHT ETERNAL a handsome amount of attention.

Now, with more eyes on them, THE NIGHT ETERNAL emerge from the shadows with their full-length debut, Moonlit Cross. Ever aptly titled, Moonlit Cross moves like a travelogue across the mysteries of the night – and of course, THE NIGHT ETERNAL’s namesake itself. Still night-prowling like that first EP, here on their first full-length salvo do the band reveal more (and more powerful, and moodier) shades of their epic sound, bridging both the epic end of traditional metal as well as the root variants which preceded it.

As the band explain, “In comparison to the self-titled EP, on Moonlit Cross we´ve included even more influence from various kinds of guitar-driven rock music, ranging from the ‘70s to the ‘80s, which shaped us as musicians. Combining it with our own sinister style of heavy metal allowed us to exactly create the music we’d been missing in today’s scene. We invite you on a journey to the lowest depths of our hearts.”

Indeed, the swagger THE NIGHT ETERNAL exhibit here owes more to early hard rock, invoking such names as Thin Lizzy, Rainbow, Scorpions as well as heavier sounds reminiscent of Mercyful Fate and Black Sabbath´s Dio-era. Yet, familiar as these touchstones may sound, the darkness they so dramatically drape across their compositions puts Moonlit Cross on another realm altogether – and one, it must be said, that evades easy categorization, be it stylistically or chronologically. Simply, THE NIGHT ETERNAL are putting their proverbial hearts on their sleeves, and the music they create is an honest, authentic, and goosebump-inducing reflection of the incredibly vital blood pumping in those hearts.

Massive hooks, sweeping dynamics, high drama, and of course, the commanding vocals of frontman Ricardo, all wrapped in a rich ‘n’ robust production by Ralf Praekelt, with mastering by Chris Common at Twin Hills Recording – THE NIGHT ETERNAL have truly arrived with Moonlit Cross.