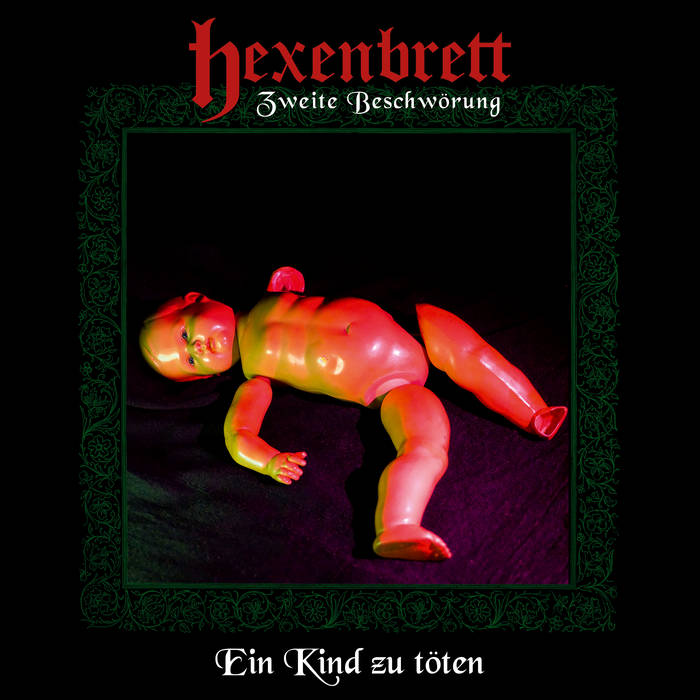 It was at the dawn of 2019 when a strange little demo inconspicuously announced itself from the other side and introduced the sound of the bloody iris. Titled Erste Beschwörung, it was the first public recording of one HEXENBRETT, the work of a mysterious duo revealing themselves as Josto Feratu and Scarlettina Bolétte. This was a literal bolt from the blue, sounds that were as refreshingly new as they were authentically old. “Cemetery sounds” is what the band called them, but that only told half the story. Wild and wily, HEXENBRETT unloaded a dizzying payload of sounds both traditional and unorthodox, dumping into its hot-rockin’ cauldron spices from first-wave black metal, Iron Curtain-era speed metal, outsider doom, and even old-school deathrock. It was a kaleidoscopic spin, and caught the attention of Caligari Records (who did a wider cassette release) and then DYING VICTIMS with their 12” vinyl version toward the end of the year. Lots of other, strange-starved ears picked up on it, too.

The stage thus set, HEXENBRETT proceeds to defy expectations and obliterate the slate with its debut album, Zweite Beschwörung: Ein Kind zu töten. A record of stark contrasts, Zweite Beschwörung immediately sounds definitively like HEXENBRETT: roaming ancient cemeteries with a torch in hand, conjuring the madness and mysticism of early black metal, when unorthodoxy was celebrated and no blueprints yet existed – only paths to be blazed! But, that latter element is precisely where Zweite Beschwörung takes a different turn, delving into waters both more refined and more rarefied, more straightforward and more obtuse – more METAL, epic and outlandish and “true,” but decidedly in an un-metal manner – beguiling the senses either way, and addictively so. It’s a turn that’s directly inspired by such sources as varied as Varathron, Jean Rollin, Danzig, Goblin, and Van Halen, and yet emerging completely unique and unlike little else around. A diverse journey through mouldy crypts and deranged minds, Zweite Beschwörung: Ein Kind zu töten features eight original tracks and an astonishing cover of Townes Van Zandt's "The Spider Song".

Quite commandingly, HEXENBRETT reveal an uncanny knack for songcraft, building defined and endearing hooks that unfold unexpectedly yet thrillingly, the intensity constantly rising and falling with preternatural ease but always in service of the song. Elsewhere, the band coats its creations with subtle layers of synth, further fanning that otherworldly atmosphere that laid in wait across the demo while ragged aggression usually took over. Which is all to say nothing of the absolutely spellbinding chimes often employed, evoking a banquet of horror with an almost-filmic quality in line with the band’s love for European cult cinema. And, fittingly, the production across Zweite Beschwörung is richly analog, scrappy but shimmering, evincing a totality of design and just-professional-enough presentation without sacrificing the entity’s original ethics. Like most first albums should be, the tale of HEXENBRETT truly begins here.

If there was ever any question about HEXENBRETT’s singular nature, just beginning to bloom, simply gaze upon the cover art to Zweite Beschwörung: Ein Kind zu töten. All other paths blazed, this is the only one left, and it’s HEXENBRETT’s alone… The dead will dance, expect the unexpected!