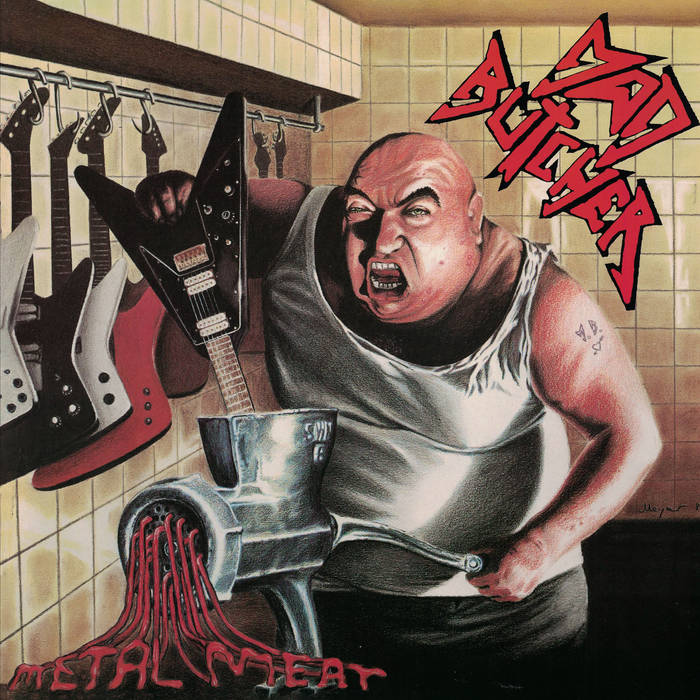 RELICS FROM THE CRYPT, the sub-label of DYING VICTIMS PRODUCTIONS dedicated to keeping the past alive, is proud to present a LONG-overdue reissue of MAD BUTCHER’s cult-classic second album, Metal Meat, on vinyl LP format.

While it would seem that MAD BUTCHER were inspired by Germany’s legendary Destruction, the truth is rather the other way around: MAD BUTCHER predated Destruction by a number of years, and began even earlier than Teutonic metal mainstays Accept, Steeler, Grave Digger, and Living Death. As such, they were one of the first real metal bands in Germany to pick up sonic influence from the burgeoning NWOBHM movement and the early US metal scene. And what they delivered with their ragged ‘n’ righteous debut album, 1985’s Lightning Metal Attack, stands immortal to this day even though it’s largely remained a cult curio among diehard metal collectors. RELICS FROM THE CRYPT reissued it on vinyl in late 2020, and now grants MAD BUTCHER’s equally electric second album, Metal Meat, the same treatment.

Originally released on the long-dormant Metal Enterprises in 1987, Metal Meat is both an intensification of that rough-around-the-edges but addictingly spirited debut and a smoother, more-finessed version of it. It’s imperative to understand that that Lightning Metal Attack was rather “behind the times” when it was originally released in 1985, given that MAD BUTCHER’s subgenre-defiant sound spanned ALL heavy metal of the day, from NWOBHM to the early ‘80s US sound, before speed metal and then thrash splintered forth from that wider stylistic pool. That they then kinda cobbled it together into an adrenaline rush strikingly similar to speed metal is no mean feat. By comparison – and, crucially, retaining the same lineup as the debut – Metal Meat’s speed metal songs cruised with confidence and ease, in no small part to the improved production, which was still considered “raw” by mainstream standards. However, it’s those hooky, vaguely “mainstream” strutters here that make Metal Meat such a wild and enduring spin. There’s never gonna be a moment where one would ever mistake MAD BUTCHER for a hair-metal band, but a great deal of this album sidles most sinisterly next to that oft-maligned idiom, the band’s more pronounced hard-rock swagger suggesting the Sunset Strip rather than the industrial wasteland of their native Ruhr. Put another way, Metal Meat is far closer to the dark & heavy sleaze of early W.A.S.P. or even Exciter’s way-ugly Unveiling the Wicked than, say, Poison or Ratt. And of course, MAD BUTCHER’s innate German-ness rings loud and clear here, with vocalist/bassist Harry Elbracht delivering an effortlessly creepy performance.

And while MAD BUTCHER would disband in 1990, after two officially released albums and a third posthumously released in 2020, their legendry among the true-metal faithful was forever etched with Lightning Metal Attack – and further etched into the annals of CULT with its inadvertently strange follow-up. Now, for posterity, RELICS FROM THE CRYPT will deliver this Metal Meat right to your table, on the format it so deserves: vinyl!