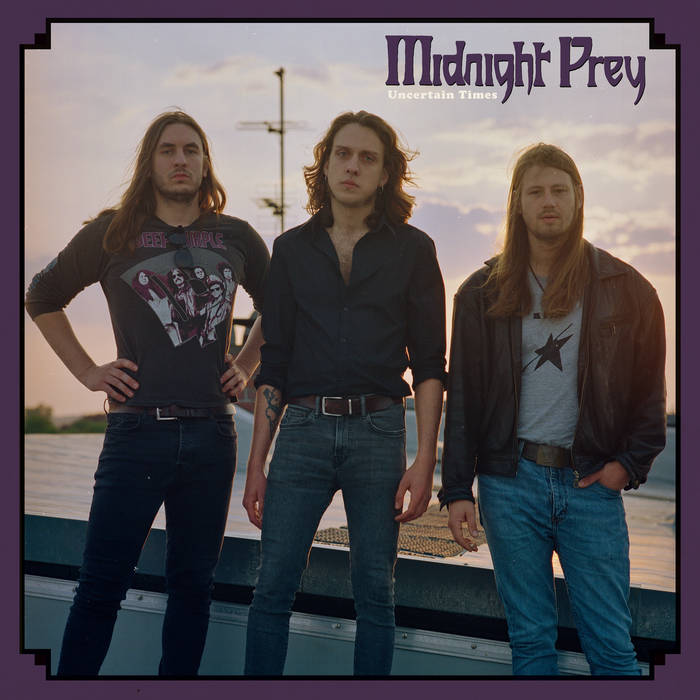 Sojourner Martin Popoff once described Slough Feg as the 'punk version of Iron Maiden'. In that case, MIDNIGHT PREY are the punk version of Slough Feg. Their sound is fresh and exciting yet hard to describe. At times, it sounds like the Ramones covering songs from Motörhead's 'On Parole' with the assistance of Brocas Helm. Favorite track: Stoff.

Smoking Roadie Excellent and highly underrated band. Rare to hear this kind of Speed Metal / Rock hybrid bands having totally their own sound, been spinning the full-length frequently after the release from vinyl! Bad ass production and especially the guitar sound and playing is spot on! Favorite track: Stoff.

Lute FP Holy crap, this is good. The first onslaught of riffage will make you assume it’s another Motorhead clone, but it is so far from that.

Killer vocals that remind me of Swedish blues-rock ala Graveyard, but sung much faster so as to keep pace with the music. And the music...

The bass is so fresh, present, and frenetic. The drums plug away like they’re in a punk band, and the guitars blaze across the top of the rhythms. Everything comes together, sounding fast and melodic at the same time.

Honest rock music played on real instruments: this is MIDNIGHT PREY! In a feral-yet-atmospheric way, this German three-piece play an honest and powerful old-school kind of sound, anchored in the darkness.

When MIDNIGHT PREY was founded in 2013 by Hannes Ruhland (drums), Winston Ziller (guitars, vocals), and Daniel Friesen (bass), they had known each other for two more years since the age of 16-18, already having a bit of reharsal and live experience together and apart. From Venom to Frank Zappa, from Roxy Music to Bolt Thrower, from Rory Gallagher to Black Flag - almost nothing was taboo on their record players. Growing up together sharing their love for good handmade music of all kinds of varieties, they played their way through Germany's underground heavy metal stages and released a demo on tape called The Savage Sessions in 2013 via Witchhammer Productions. In 2014, a promo tape called Rehearsal Rites was exclusively sold at one show, containing rough recordings of the songs to come out on the following EP, Rite of Blood, which was released on CD, tape, and digital.

MIDNIGHT PREY moved from the southwest of Germany to Hamburg in 2015. After playing a lot of shows in Hamburg, there was the release of a 7" single called Blood Stained Streets, which underlines their romance for the dirty, booze-soaked streets of St. Pauli (Hamburg). Now, at long last, their debut album, ominously titled Uncertain Times, is nearing release, and the power-trio are more than ready to unleash their sheer energy onto the world!

Indeed, energy is in abundance across Uncertain Times, but tempered with a focus and clarity that suggest the work of veterans. Skillfully working with space and shade, the songwriting retains an urgency but is never in a rush to the finish line, either; MIDNIGHT PREY just play it cool and keep the heads banging and fists pumping. Likewise, with that ever-present energy, they wisely don't over-distort or saturate their sound, keeping a clean-yet-gritty aspect that reverently straddles their many stylistic inspirations. Whether it's '70s hard rock, '80s heavy metal, or classic punk and speed metal, MIDNIGHT PREY mix it all into one addicting concoction that simply demands total thralldom - and repeat plays!