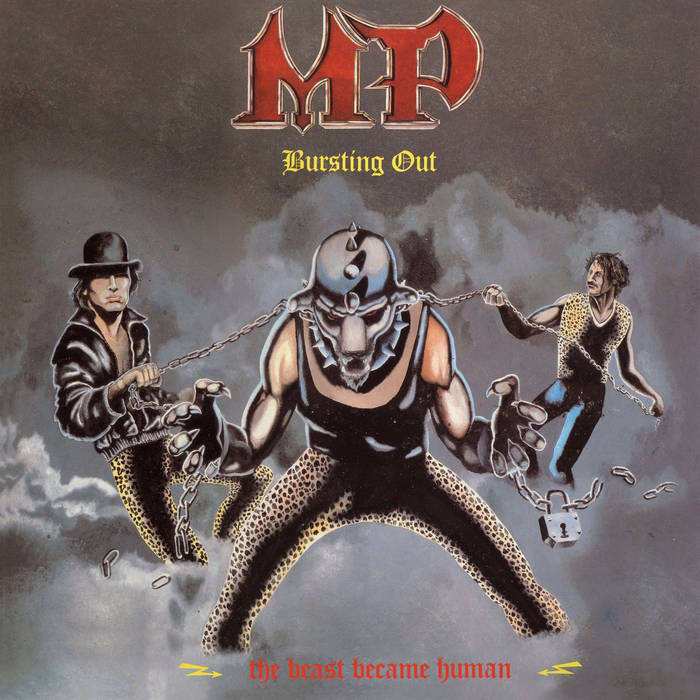 RELICS FROM THE CRYPT, the newly founded sub-label of DYING VICTIMS PRODUCTIONS, is proud to present a reissue of MP’s cult-classic debut album, Bursting Out (The Beast Became Human), on CD and vinyl LP formats.

Originally released in 1986 on the short-lived Steps Records, Bursting Out (The Beast Became Human) was the first recorded statement of Germany’s MP. As such, it retains all the electricity and urgency of youth. It also upholds Germany’s rich heritage of heavy metal, which spanned the early hot-rockin’ throes of post-NWOBHM to the nascent rumblings of speed metal and its subsequent thrash offshoot, and of course the more mainstream stylings which lingered across all those idioms. It was still the 1980s, after all, and “heavy metal” as both a term and especially a musical style & subculture had yet to be too finely locked into boundaries. And with a complete lack of self-consciousness and, in its stead, an abundance of enthusiasm and energy, MP ably crisscrossed all these metals on their debut album, Bursting Out (The Beast Became Human).

Indeed, aptly titled, Bursting Out (The Beast Became Human) is a measured and never-messy explosion of hooks and heaviness, headbanging and hard-driving speed. Rough and raw yet somehow refined, MP at this stage authentically conveyed a sense of literally living & breathing HEAVY METAL, and each of the 10 should-be anthems comprising their debut full-length delivered the goods, each one as different as the last but altogether unified in their all-out metalness no matter the dynamic being explored. From the locomotive thrust of the opening title track to sleazy, midnight-walking panthers like “Startide Rising” and especially “Out for Love,” from the equally sleazy blitz of “On the Loose Again” to the stand-up-and-shout strut of “Fight for Your Life” right after and concluding with the moody push ‘n’ pull of “World of Tiers,” MP covered all ‘80s-stock metal bases and then some. Naturally, the specter of national heroes Accept loomed large across Bursting Out, but the band could just as handily hold their own with the likes of Living Death, Iron Angel, and Warrant domestically and even Exciter, Abattoir, and Nasty Savage overseas. And if their seemingly odd choice of moniker left any doubt, the trio drove the point home with “MP (Metal Priests).”

MP continued on for two more albums before changing that moniker to Melting Point, the title of their 1992 album still under the MP handle. But, of course, the band’s Bursting Out debut is their most beloved album, and one that cemented MP’s status as a cult band. Experience it again – or for the first time – on vinyl again since its original release, or on CD with ten live bonus tracks!