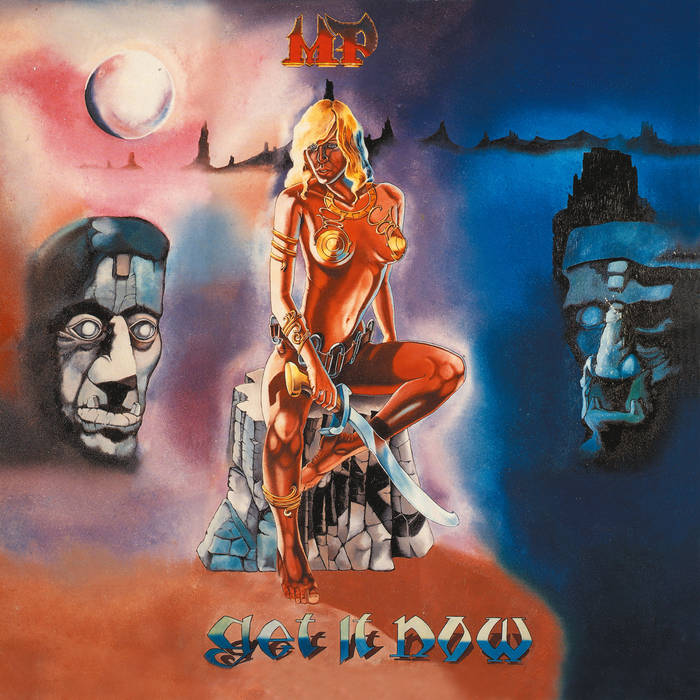 Lute FP Ah, dearest 80s. What a wonderful decade, where technology made so many things possible but we were still naively unsuspecting of its duplicity.

This album rocks. Falling somewhere between Motörhead and Scorpions, if such were possible- straightforward rhythms with killer melodic vocals that stick with the rhythm. As much rock as metal, with the tasteful guitar work tilting things more towards the latter.

Mungo I dig it! This album felt like a soundtrack to a cheesy action movie in the future. It also reminded me of Krokus a lot. I definitely recommend this one. Favorite track: Claws From The Night.

RELICS FROM THE CRYPT, the newly founded sub-label of DYING VICTIMS PRODUCTIONS, is proud to present a reissue of MP’s cult-classic second album, Get It Now, on CD and vinyl LP formats.

Originally released in 1987 on the short-lived Steps Records, Get It Now, was the second recorded statement of Germany’s MP. Their debut album from the year before, Bursting Out (The Beast Became Human), retained all the electricity and urgency of youth, and subsequently become a cult record for its raw verve. A year older and presumably wiser, the power-trio unleashed a more finessed follow-up in Get It Now. While the band hardly wavered in their approach between the two albums – still spanning the early hot-rockin’ throes of post-NWOBHM to the nascent rumblings of speed metal and its subsequent thrash offshoot, and of course the more mainstream stylings which lingered across all those idioms – MP here focused their songwriting into a more streamlined push ‘n’ pull that was 100% HEAVY METAL personified.

And yet, its year of release provides some (in-hindsight) context for Get It Now’s unique and underdog nature, which has thankfully made it an enduring album. Not only in Germany but across the world, traditional metal was on the decline as “hair metal” crept up the pop charts and thrash metal exploded all across the international underground – and lest we forget the first album-length rumblings of death metal. In this landscape, where subgenres started taking hold and “heavy metal” as both a term and especially a musical style & subculture became much more defined, MP doggedly defied the norms and stuck to their increasingly gleaming guns. As such, Get It Now retains a rich, metal-for-metal’s-sake balance between slick ‘n’ speeding burners and grimy fist-shakers. And while the debut album conspicuously nodded toward metal culture with “MP (Metal Priests),” here do MP continue to acknowledge that culture through the wider world’s acknowledgement of metal culture with “Rocktober Blood,” about the cult horror film of the same name. Elsewhere, the production was taken up a couple notches without losing that raw verve that so endeared the band’s debut album, arguably making Get It Now the fullest expression of MP’s true metal might.

MP continued on for one more album before changing that moniker to Melting Point, the title of their 1992 album still under the MP handle. Like many overlooked albums within the metal pantheon, Get It Now never truly got its due “back in the day,” but thankfully, it sounds surprisingly fresh today, and RELICS FROM THE CRYPT hopes this dog will have its day with this long-overdue reissue!